Testing software is important and smart contracts are no different. However, properly testing smart contracts is absolutely crucial as it is impossible to update them after they have been deployed to the chain. The mantra of the lazy developer, "we will fix it in post", definitely does not fly with smart contracts.

Clarinet features a testing framework that allows developers to automate tests. These tests are written in code and describe the intended functionality of the smart contract. In this case, that code is written in TypeScript. Covering TypeScript itself is out of scope for the book but most web developers will be familiar with it. If you have done some JavaScript then it should also be easy enough to pick up.

Clarinet will generate a test file for each contract you instantiate using the clarinet new contract command. In the folder tests you will find one for our counter contract called counter_test.ts. Depending on the version of Clarinet you are using, it should have added some imports and template code to the test file. You may remove the template code but make sure you leave the import statements intact. 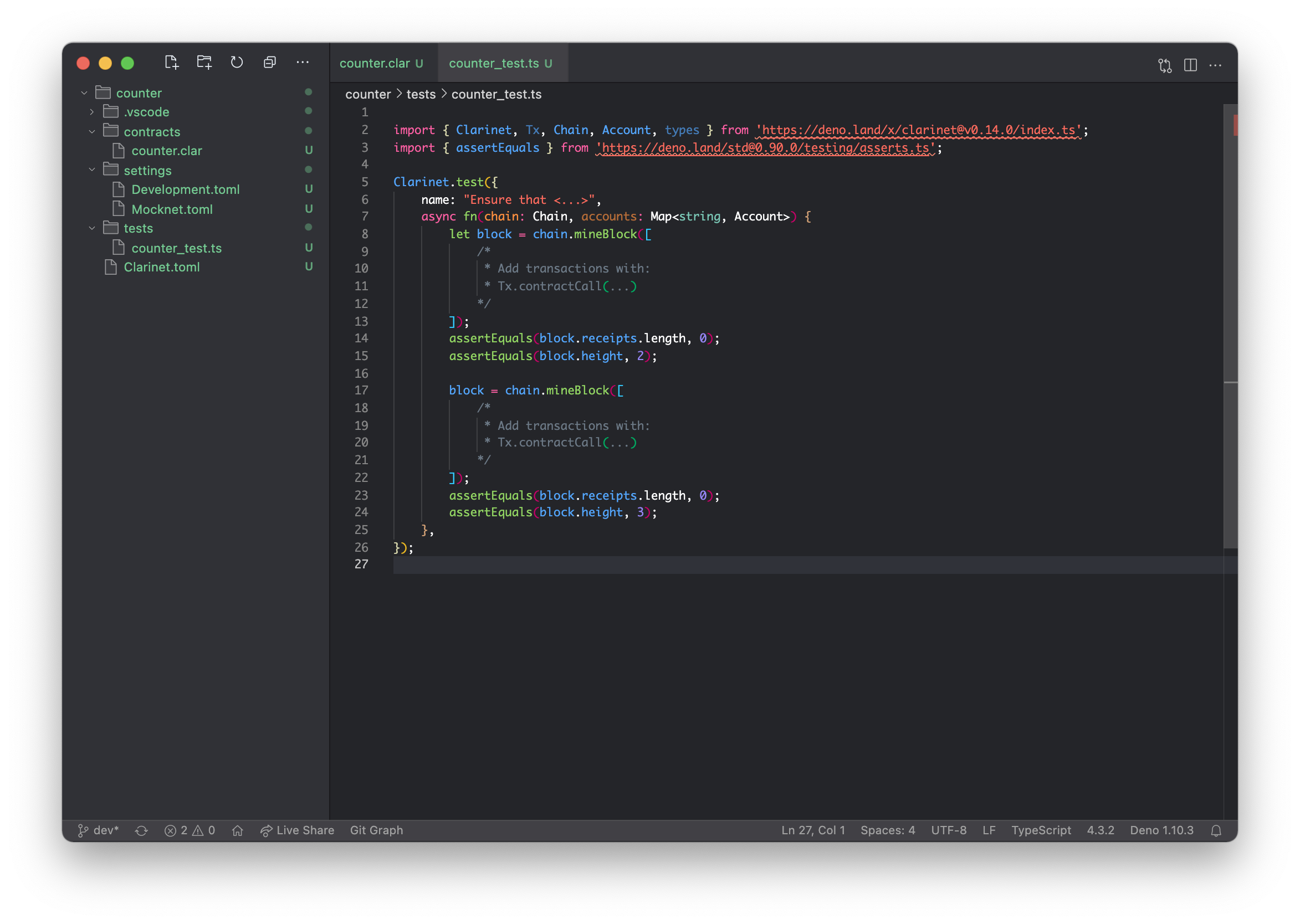 Tests are defined using the Clarinet.test function. They have a name, which is used as a description, and a callback function that is executed on test. Before each test commences, Clarinet will instantiate a fresh local chain and then run the function. The function should run one or more contract calls against the contract to test it. The testing suite makes writing these calls easy but still uses contract-call? Behind the scenes.

In order to write successful tests, we should first think about the intended behaviour of the contract. That does not only include success states but also failure states. Remember, behaviour is observed from the outside. We care about which inputs produce what outputs. How it is implemented is a detail. Let us describe all of them in bullet point format.

Tests should be kept as simple as possible. You want to test exactly one aspect of a function call. The reason being that if a bug is later introduced in the contract, only the tests that specifically target that section of code will fail. Complex tests that leverage a lot of functionality can fail because of many different reasons and may make identifying the actual bug a lot more difficult.

We will therefore start by writing a test for the default behaviour of get-count; namely, it returning u0 for principals that have never called count-up before.

We are now ready to execute the test using clarinet test. If everything went well, our test should pass with an "ok" status.

The next step is to test count-up. We will write a minimal test that first calls count-up once, and then check the count using get-count. As mentioned, Clarinet will refresh the chain state for every test so that the starting conditions are always the same. We therefore know that the first count-up call will always result in the counter for that tx-sender to be u1.

Clarinet simulates the mining process by calling chain.mineBlock() with an array of transactions. The contract call transactions themselves are constructed using the Tx.contractCall(). The Clarinet TypeScript library provides a lot of helper functions to mine blocks, construct transactions, and create function arguments. Inspect the source or see the Clarinet documentation for a full overview.

Although the two tests we have written cover all code paths in our smart contract, it makes sense to add another test that explicitly tests the multiplayer aspect of our contract.

Let us again run our tests using clarinet test. Clarinet will execute all tests and show us the result. We should get three ok's. If, not then the output will show you where it went wrong. Edit your code and try again.

That concludes our first project. You now know what the entire Clarity smart contract development flow looks like! The full source code of the counter project can be found here: https://github.com/clarity-lang/book/tree/main/projects/counter.